We are delighted to announce the launch of pen and ink or pen and ink and wash drawings of churches, which make ideal, unique gifts to celebrate weddings or christenings or just as a gift for someone precious to remember their own parish church.  For full details and prices look on our website http://www.rogerharveyart.co.uk/ - click on the tab 'Unique Gift'. 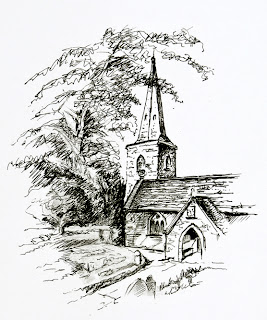 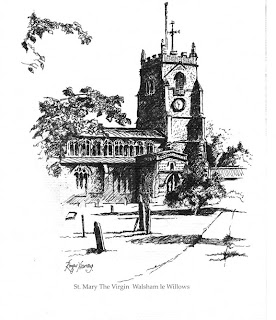 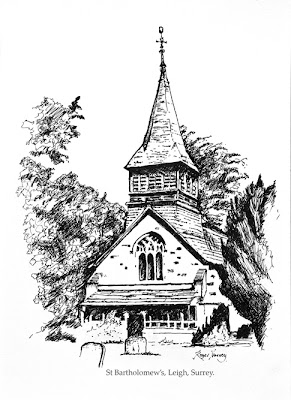 St Bartholomew's, Leigh, Surrey
Posted by Roger Harvey at 15:35 No comments: Links to this post

On Sunday 6th November, Roger was invited to join Shami Gill, the proprietor of Wattisfield Wines, Walsham le Willows, at his annual charity fundraising event at Haughley Park Barn, Stowmarket.
Over 70 wines from all over the world were set out at seven tables for people to taste, a light lunch was served and Roger's paintings were displayed on a lit show stand and they created a great deal of interest, as it was the first time in the 10 years' history of the wine tasting event that there was an added attraction for people to enjoy.
At 2.00 pm a portrait, that Roger had painted of Shami Gill, was unveiled to enthusiastic applause.  People commented that Shami was wearing the same clothes that he had worn for the photographs, from which the painting was created and that Roger had captured the unique way in which Shami holds a wine glass. 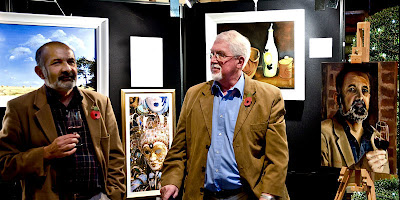 Left to right:  Shami Gill, Roger Harvey and the portrait of Shami

Roger explained, to a number of people who asked, that, he prefers to take a large number of photographs of a subject as they reveal mannerisms that are peculiar to that person﻿.  As a result, you not only capture the likeness but you capture that something special, which Roger calls 'their action print'.  This can be seen in many of the paintings of sporting personalities that are displayed on Roger's website www.rogerharveyart.co.uk - look at the 'Memories' tab.
Posted by Roger Harvey at 15:58 No comments: Links to this post